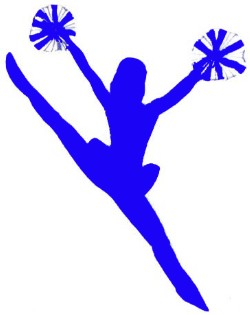 Throughout the fall, the women’s poms team dazzled audiences with performances at football games and special events like Spirit Week due to the hard work that began at the end of last school year.

“The fall season was very successful,” said Coach Amy Meyer. “They put in many preseason hours during the summer to work on technique and stamina. They also spent many hours rehearsing the different routines they performed.”

Over the summer, the poms team attended a camp that was at Michigan State, where teams from around Michigan came to meet and work together and get better together. “It was a good way to kick off the season. I learned a lot from my friends and the other teams from across the state. It was very tiring but super fun,” said freshman Alesha Dean.

The girls’ sideline poms season was full of many highs, such as when the team was invited to dance alongside the choir during the Homecoming Pep Assembly and the team members worked hard fundraising to earn practice mirrors for themselves. They showed that they could work together and progress as a team.

The team’s success depended on everyone, not just a few individuals.  “We operate as a team and no one is more important than another. We are only as successful as we are by the effort each girl puts forth into their team. There is a common goal and many memories created along the way. I love working with all of them because they each bring an important trait to the team,” said Coach Meyer.

Senior Madison Cohen joined the poms team her freshman year because she has been “dancing all my life, my sister did poms and I wanted to follow in her footsteps.”  Being a senior on the team brings great responsibility. “The three seniors on the team and even the juniors try to help out the freshmen.” said Cohen. The freshmen appreciated the guidance. “It can be intimidating dancing with the older girls, but it makes me work harder to get better,” said Dean.