Members of Central’s marching band were glowing as they walked around the halls last Monday morning, sporting shiny new hardware after smashing the competition at the Bands of America (BOA) Regionals on Saturday September 28 in Toledo, Ohio.  They took first place in their flight along with sweeping all caption awards including Best Music, Best Marching, and Best General Effect. They went on to win 2nd place overall.

They started the day off ready to kill it with a 6:00 a.m. rehearsal Saturday morning before leaving for their long trip at 8 a.m.

They were ready to win from the very beginning thanks to the careful preparation of the months previous.  According to senior trombone section leader Jonnie Rozin, the long, time-consuming practices were vital to their accomplishments.

“No other band would do what we do, in how we come to the school at 6 a.m. in the morning just to practice,” he said.  “Standing there in the auditorium that early made me realize how happy I am to be a part of such an extraordinary team.”

Bonds were built and laughs were shared on their long journey to Toledo.  The anticipation grew and they were ready and prepared for their performance.

“There was definitely some down time to relax and rest which is vital for growth in our performance,” stated senior marimba player Jordan Tumminello.  “There was also time to get ourselves in the focused and professional mindset in order to perform well, and the bus ride was definitely a factor that helped the performers acquire the right tools needed for a wonderful performance,”

Their performance took flight at 12:45 p.m. and the magic began.  They played with passion and dedication which led to their success.  They took first place in their class, Flight AAA, as well as taking home all the caption awards, Best Music, Best Marching, and Best General Effect. But their day did not end there.

The day carried on with additional practice before they performed for a second time at 9:45 p.m.  They took regionals by storm and ended the long and stressful day with taking 2nd overall.

“It wasn’t really hard,” stated Tumminello. “After being in the music program for so long, I have learned that when you have such passion for something you love, you are able to deliver spectacular performance quality on demand whenever you need to,”

The road back to the school was quiet and peaceful after such an exhausting competition.  The day was finally over at 1:30 a.m Sunday morning after watching the show as a team.

“It was an amazing feeling for my first competition.  We had never won our class before and I was proud to be a part of the first band to do it,” said senior Emmi Lawless.  “I knew all of our hard work finally paid off…what an amazing way to start our season,”

After such success, they are prepared to crush the completion in the future.  Come out and watch them take over Lakeland’s invitational, October 5. 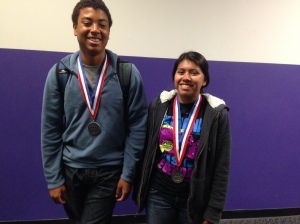 Proud band members wear their medals to school the Monday after the competition.